END_OF_DOCUMENT_TOKEN_TO_BE_REPLACED

After I posted the last blog, things just started falling in line and getting done.

I got a call Monday about delivery of the new sectional. They could have brought it this past Wednesday, but there was no way I would be ready, so its coming this Wednesday. This was the kick in the ass that I needed, a definite date that I HAD to be done by. I’m not usually big on procrastination because it makes me anxious, but sometimes I guess I need the crunch time to really get rolling.

I found a place that deals in mid-century furniture and sold the couch and chairs. I got a bit less than I would have liked, but considering the cushions needed to be replaced/recovered, I’m not considering it an extreme loss. It was kind of hard to see it go since its been around my whole life, but I know the new furniture will be a welcome change. Paint was purchased on Monday, we got the chimney cleaned Tuesday (it was bad, y’all), and the old couch and chairs were picked up on Thursday. Wednesday I threw tarps over everything and painted the ceiling. What a pain. in. the. ass. I kept getting paint in my eyes. I used up the gallon I’d gotten and had to send Zach to pick up another to finish. He and Jon helped me finish the ceiling. Friday Zach and I were able to get the walls done. Saturday I did trim, and between Saturday and today, the carpet was cleaned.

So now I have this big, empty room. 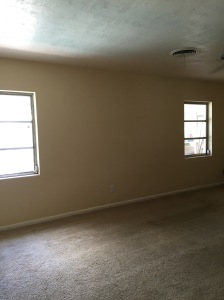 I have curtains to hang. I have plenty of pictures to put on the walls. The sectional is going between the windows, across from the fire place. Eventually, the carpet will be replaced with wood. It probably would have been smart to do that before getting furniture, but I didn’t think about that until Friday night. The lack of sleep and paint fumes had me thinking Friday that maybe we could install flooring in just the living room, and save the rest for later, but cooler, more rested heads prevailed and said that was pushing it too much.

I won’t lie. Even though the things I’ve been worried about are now done, the past week has been a real challenge. I sat down and cried many times because I felt overwhelmed and scared. I was so anxious about getting things done that most days I was up before the sun. My allergies have been horrendous, probably because so much stuff was moved around, or I’m allergic to latex paint. Tonight it should be decent enough to open the windows, so maybe some fresh air will help.

The best part of all of this is we’ll finally have a place to gather and relax. Zach can have friends over, the TV can be comfortably viewed from more than one or two seats. We can have a fire on nights that are cool enough to pretend its worth it. Generally, the whole room is going to feel warmer and more inviting. Now I just have the rest of the house to contend with.

August is probably my least favorite month. May is difficult, with my mom’s birthday, mothers day, and date of her death all in one month, but August is a different kind of messed up. By the time August rolls around, we’ve already had a good three months of summer heat and humidity, and I know that it will continue through August with gusto. Nothing really good has ever happened in August, either.

September is moving up there, too. Maybe if I didn’t live in Florida, I wouldn’t be growing to dislike it so much, but its the FIFTH month of summer heat. If I’m over it by August, I’m WAY over it by September. I think I spend the entire month walking around with Green Day in my head.

Now its October, and its still hot and humid. Finally we have some lows forecast for the 60’s, but only for a few days, then its back to 90’s during the day, 70’s for lows. I would really like to open a window at this point and get some fresh air in here, but I’m just not feeling the temperatures yet, and won’t be for another couple of weeks AT LEAST. Its frustrating. I’m jealous of the people who are breaking out boots and sweaters.

I feel like I’ve been off track for the past two months. The first eight days of August, I was participating in GISHWHES (its a scavenger hunt. I meant to blog about it, but I’ve just been off and never got to it). It was an interesting experience, and I met some really cool people, but I got so stressed out that I ended up not feeling well. I had been doing yoga every day since April, I believe, so at the end of July I decided to change it up and do this two week “yoga shred” challenge. It was nothing like yoga, I don’t even know why it was called a “yoga” shred. I’ve done some good power yoga, and even though its a lot more cardiovascular and challenging than a lot of the yoga I’ve done, it still felt like yoga, which leaves me feeling peaceful and focused. I digress, during the “yoga shred” I aggravated a muscle in my hip. That was right around the time GISHWHES was ending. I was stressed out and tired, so I decided to give myself a break, and things just haven’t been the same since.

Last month, I gave myself a deadline of October 4th to get the living room painted. Its something I’ve been planning to do for a while (LONG ass while), plus we have some new furniture coming this month, so I thought it was doable. I thought I’d be motivated enough to do it. I did lose a week of September to a really nasty cold, but otherwise, I’ve just run out motivation to get myself moving. I don’t feel like myself, and part of that I blame on what feels like a never-ending, humid, suffocating summer.

I’ve been trying to get some stuff done in the living room this week to get it ready for painting, but every time I do anything, my allergies get awful and I’m sidelined because I can’t breathe or see. I’m trying different allergy meds, but it gets so bad I need to take benadryl, which leaves me feeling doped.  I’m starting to wonder if my allergies are partially in my brain, though, because deep down I feel bad for changing things in this house that have been one way for almost my entire life. My grandparents got the couch and chairs I have back in the 1950’s when my grandfather was stationed in the Philippines. The entire living room set up is not functional for the way we live, and its not my style. Since this is my house now, it should be ok to make it my own, right? But I still feel guilty. Plus, the furniture is large, and I haven’t found it a new home. I’ve said to Zach that I just don’t see how I’m going to work around it to paint the ceiling, walls, and trim, and there’s nowhere else in the house to put this stuff. He sees a way, but I’m just stuck seeing everything as impossible obstacles.

The only thing progressive I’ve done is pick the wall color and make a list of supplies I need (in my head). Zach has been picking up some of my slack and getting things organized and out of the way, and I feel bad about that because he’s been doing manager training this week, along with NBA preseason starting. He’s busy. Jon’s busy too. I feel like it should be my problem since it was my idea, so I’m having a hard time saying what I need to say. “I need help.” I should be excited–I’ve wanted to change the living room for a long time now, so why do I just feel like crawling in a hole, waiting for the storm to pass?