I haven’t done an update about progress in the living room. My torn up charger cable for my laptop finally gave out so I’m using Zach’s when he’s not using his or is at work. Most of the time I spend with the laptop plugged in has been spent wasting my life watching Pretty Little Liars on Netflix.

The sectional arrived on time. The guys who delivered it were very friendly and careful. They didn’t even seem annoyed when they had to take the front door off of the hinges (oops). The seating is a bit stiffer than I expected, definltely stiffer than the one I sat on at the store. They make the furniture when its ordered, so it hasn’t been sitting around in a warehouse, and it hasn’t been in a store being test sat by numerous people. I think it just needs some time to be broken in. Regardless, its lovely, and its a wonderful departure from what we had before. There’s a nice corner spot to crawl into, just like I wanted, and even if its stiff, you can just kind of melt into it after a few minutes. Its decked out in pillows for the season.

Once Christmas rolls around, I’ll swap out the pillow covers. After the holidays, I guess I’ll have to find new every day pillow covers. The last couch had patterned upholstery, so I’m loving the creamy solid color that I can add whatever I want to. It fits my restless nature and need to change my environment to suit my mood/season.

The chair was due to arrive on Friday, so we had to boogey getting the curtains up. I decided the day before that I didn’t want to go with the plain white curtain rods I’d picked up, so we went to Target to find an alternative. We brought my grandmothers coffee table and end tables back in. The chair is awesome. Its wide enough for two people and deep enough for me to curl up in and sleep if I want to. It’s leather, which I never really thought would be something I’d get. I think in my mind I always associated “leather” furniture with the ubiquitous black vinyl couches (and glass top tables) that EVERY SINGLE GUY EVER had in his bachelor pad when I was in my 20’s. When you sat on it, you’d stick to it, and there was always a split in it somewhere. Turns out actual leather is quite different, soft even. Still going to stay away from the glass top tables, though. 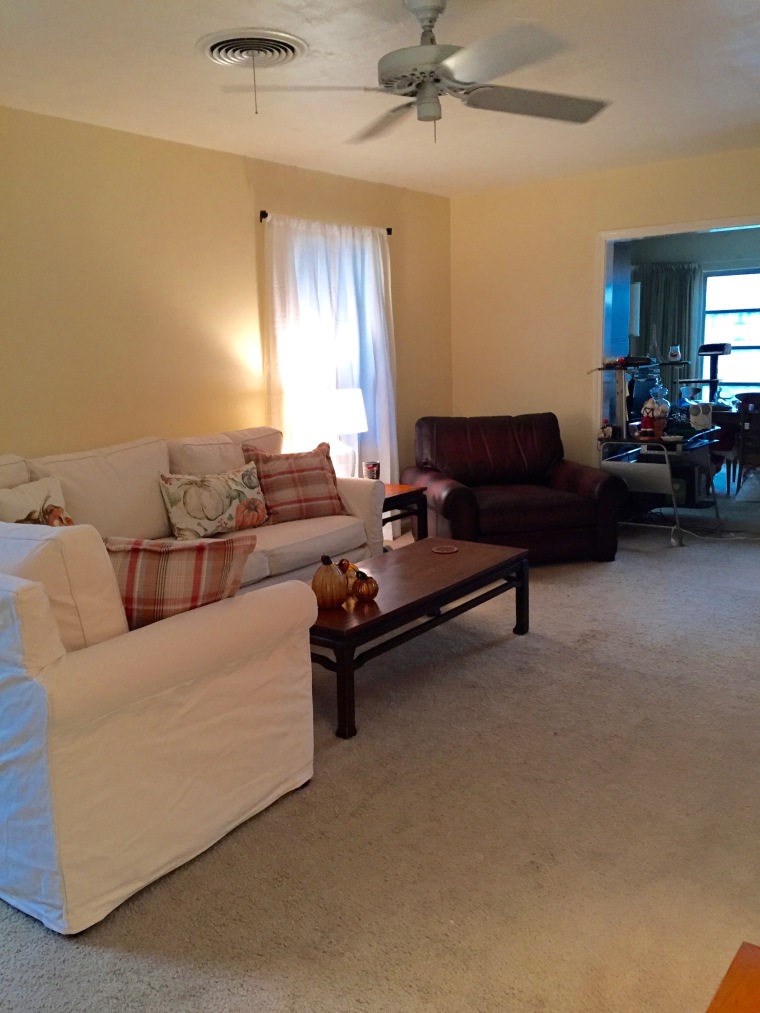 I can declare the living room as mostly settled, now. I need to pick pictures to hang, eventually we’d like to get a new stand for the tv, a floor lamp to stand beside the corner of the sectional, a console table for one rather blank spot, etc. It kind of strikes me in this picture that while the living room looks warm and inviting, beyond the chair looks like a different house. There’s still work to be done, but its feeling more like a home, and I’m starting to get an idea of what I want to do moving forward. The list is long, but I will continue to chip away at it.