My dad has been dragging stuff out of well, his closet, to be gone through. A lot of my mothers stuff. A bunch of shoes that had never been worn. She was almost as bad as me. Some of the shoes in there were mine, since they weren’t using the closet space and had room for my overflow. I think my dad is a bit disgusted by the number of pairs of shoes I want to keep. They’re my shoes, for cryin’ out loud. I don’t just part smoothly with my shoes. Its not that many pairs anyway. A couple of the boxes take up space because they’re boots, but its not like one pair of shoes man is using the space! I rest my case.

Sending my mom’s stuff to be donated has been going smoothly. I’ve made peace with the memories I have of her wearing different things. Every thing I pulled out of the closet I could see her in, except for the shoes. She was as likely as my dad was to find one pair and stick to it in her later years. I just hope her clothes go to someone who needs them and appreciates them. There’s not really anything I can do with them. They aren’t my size or style.

Her later years. I haven’t really gotten used to how final that sounds, or how final her death is. I still stop and expect to see her sleeping in her bed. I feel let down that she’s not there. Never coming back is not a concept I’ve made peace with yet. She’s been gone three weeks, but I still just feel like I haven’t seen her for a couple of days, and am wondering how she is. Her cremated remains don’t make any difference either. Hopefully we’ll get the insurance money in the next week or two, then be able to pay off the burial. At least that’s what I’m hoping.

I haven’t been doing anything useful lately, aside from going through stuff for my dad. He knows to set deadlines so I’ll get the work done. I really should do that with myself-make a to do list and set time limits. Things like taking pictures. 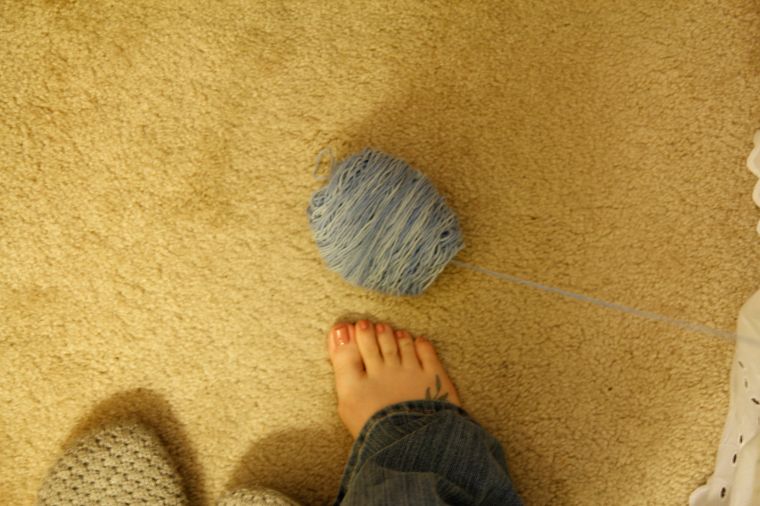 I had my camera out today to take a picture for my much neglected knitting blog and dropped the yarn on the floor. I decided what the heck, take a picture. It has no point, no area of interest, but I took it. It was nice to have my camera out just for the heck of it and not just for a special occasion. The 365 project may have defeated me, but I can still take random ass pictures.

I need to go to the store for pet stuff. I need to return something to Target and get some essentials. I need to go to the grocery. I need to clean the house. I need to sort through some stuff to see what to keep what to toss. I need to organize for a garage sale, which probably means finding someone who can appraise antiques. I would hate to give away my great grandmothers furniture if its worth something, or anything of my grandparents.

Time to relax and listen to the rain. We really need it.