Thanksgiving has been cooked, and eaten, and the leftovers put away. Everything was pretty chillax up until the end when suddenly I had to finish everything  with no help from the peanut gallery. The turkey turned out really delicious and succulent. 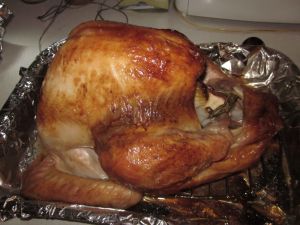 I cook it according to the gospel of Alton Brown, brining and roasting first at 500 degrees, then dropping it to 350. If you want to try it the next time you cook a bird (you really do want to try this) you can go here and try it on for size. I won’t be roasting another whole bird until next year, since we switched to ham for Christmas, but I will definitely be using that method again.

The cornbread stuffing with bacon turned out really super yummy and pretty. I wish I had remembered to take a picture of it. The mashed potatoes and green beans were delightful, and the gravy was lumpy, but I forgive myself for that because at that point I was running around with a burned finger trying to get the potatoes mashy and the green beans steamed just right. Then I had to leave the kitchen entirely to get the kid to come help because I was at a loss for all of the appendages necessary to finish and serve the meal. Oh, and the cranberries I made the other day? Oh my goodness. There was just a hint of the orange, and the warmth of the cinnamon and ginger weren’t lost to the tart cranberries. I have to give props to Jaclyn for making me want to do cranberry sauce again. There is pumpkin pie to be had, but I’m not feeling like pie right now. Honestly, I’m not much of a pie person, really. I like the filling, don’t like the crust.

Now that this holiday is over, its time to prepare for the next. But that won’t start until after I take a post-meal post-blog-post nap. I think I’ve earned it.