This is my puurrrple bag. Its sort of a lavender/mauve mix. I like it. (that’s my leg beside it. Please ignore the leg) 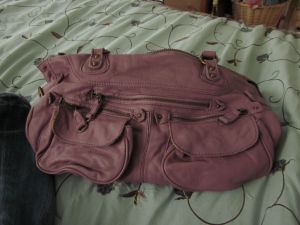 This is the inside of my bag. Hard to tell how much stuff is in there with that busy print liner, huh? 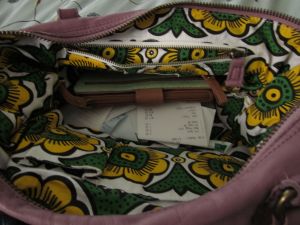 This is the contents of my bag.

We have my wallet. An umbrella. Receipts from Starbucks, Target, and the Apple Store. There’s also sunscreen and a little sample size lipgloss from Lancome that I love. That’s it. I keep it very simple. Plus I have a fear of it sticking out too far, bumping into something in the china department, and causing a huge cataclysmic event thorough the entire department.

Another reason I carry so little in my bag is because I change purses fairly frequently so the less to move the better. Plus, the leather bag is heavy enough on its own, so no need to overstuff.  When I carry it I also put my keys and phone in there, but they don’t tay there all of the time, obviously.

This is a big reason, too. When I was a kid, my mom was one of those who carried, like, a survivalists kit and then some in her purse. It was always stuffed and heavy. Yes, it was nice that she had kleenex, but seriously. She carried a lot of unnecessary stuff in her bag. When I was a teenager  (and adult) I tried to convince her to lighten the load. I carried a heavy backpack and had an idea of what it was like carrying that much stuff. She never changed though. Always had her grocery coupons even if we were at the mall. I think the memories of that make me want to be as minimalist as possible with my bag. Or its that constant “I don’t want to turn into my mom” chant in my brain. Is that terrible that we don’t want to be like our mothers?